Community outreach was limited to participation in TriCentennial and Fiesta events that began in January 2018.

-The City of San Antonio has not released the expected Request For Proposals for development of the parking lot in front of Casa Navarro and the land on the east side of the San Pedro Creek (the old City Annex property).

-The City of San Antonio intends to place temporary buildings on the old City Annex property to hold City offices while the City Hall building is renovated.

-The City of San Antonio has started a view shed program.  They intend to select and develop about five view sheds a year.   Five have been advanced by the Office of Historic Preservation for 2018.  The Casa was not really in the running this year.  We will have to purue a view shed, parking slots and a Motor Coach load/off-load slot some other way in order to be timely.

-Bexar County has not released the expected Request For Proposals for development of the 200 block of S. Laredo St (the land surrounding the Casa Navarro site).

-San Pedro Creek Culture Park Phase 1, Segment 1 (from the mount of the tunnel to Houston St) opened on May 5, 2018.  Phase 1, Segment 2 (from Houston St to Nueva St) will have a final design review in June 2018.  The portion behind Casa Navarro will have a basic design completed, but the anticipated amenities and art will not be designed yet.  Complete designs for the portion
from Dolorosa St to Nueva St will not occur until the intentions for City and County property adjacent on both sides of the creek are known.

-The new Federal Courthouse is expected to break ground in 2019.  We have not seen the amended designs yet.  The footprint is expected to be essentially the same as we have seen.

-The Centro Partnership suffered a shakeup due to the resignation of the CEO and the embezzlement of funds by a financial employee.  Restructuring is in the works, and the employee is expected to be prosecuted.  Centro has a great deal to do with the future of the Zonal Cultural (which Casa is a part of).

-Local run-off elections from the Primaries will occur on May 22, 2018.  This has slowed some actions down.

-Jorge Cortez is phasing out of the leadership of the Cortez Family of Restaurants.  It is due to age and health.  Pete Cortez is taking over the top position, and the rest of the family is adjusting.

-We need to get back to work on the plan to reclaim the Navarro land behind the Casa site.  Things we placed in limbo when Mr Nau came to visit Judge Wolff in the summer of 2017.  We were essentially told to sit and wait until contact from Bexar County.  THC never responded one way or another.  We are going to be overcome by events if we do not move out again on our own.

Rosemary and Jerry are known as the primary faces and advocates of the Casa and the Friends group.  We need more people who are immediately recognized as faces and advocates.  We have to show that there are more than two people involved.  We started to work on that by having more people at the last Proclamation session of the Bexar County Commissioners’ Court.  And we need to have more, and more faces at these various sessions.

Rosemary Geyer
Posted by Carol Cieszinski at 2:52 PM No comments:


It's that time of year again.  Mark your calendar.  Your going to love what we are about to do for the 2020 and 2021 year. The date is October 19th the place is Casa Navarro and the Time is 11 am to
1 pm.  We're going to need all of our friends to commit to helping us.  You can do this by getting involved now.  A call to me our any one of the Board members of Friends is all it takes.  We will welcome you and look forward to working with you and appreciating the talents you can bring to us.  For the event day.  Those of you who have a handi-cap sticker you can park free around the Casa Navarro at meters. The rest of us will have find a parking lot. Luckily there is one right across from Casa Navarro
It is a good choice for those whom walking is a problem.  I look forward to seeing all of you on that day.  Our future looks very bright.  My next post is a report we got from our Board member Jerry  Geyer typed up by his wife Rosemary Geyer. Jerry is on the Board of Friends with me.  We are so proud of all the work he has been doing and continues to be working on until the completion of this project. Hope you enjoy reading about all the coming buildings that will be built near us.  The San Pedro Creek project which Jerry heads is currently behind the Spanish Governor's Palace.  The 1st leg of this project is already open to the public.  If you haven't gotten downtown to see and enjoy it I recommend you do so a.s.a.p.
Posted by Carol Cieszinski at 2:52 PM 1 comment:

Navarro at a younger age.


This is a photo of a photo hanging in Jessie's Navarro Rancho Museum in Jourdanton TX. He told me that he took the picture of an oil painting.  He couldn't tell me who had done it though. It was was hanging in a museum in San Antonio, TX.  The thing I like about it is that this is the first time I have ever seen any photo of my anscestor  at a younger age. 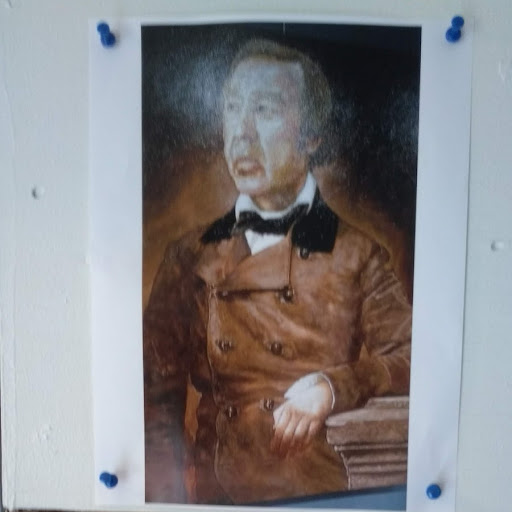 Posted by Carol Cieszinski at 2:19 PM No comments:

On Vacation to Minnesota

I've been away for most of the month of June and no excuse for not posting in July.  The Board of the organization the Friends of Casa
Navarro has kept me busy.  I'm on a committee that is writing the by-laws for the group which has been very tedious.  We will be
presenting our work to the Board this October for passage.

Meeting new people with a group called Voices Cosmcas, which
means Cosmic Voices.  They are a group of intellects, professional
movie stars from our area, poets, and all around people interested in conversations.  I attended one of their meetings I was invited to.
The first person to talk was Gary Perez.  He was a most interesting person.  He has an exhibit currently at the Witte Museum in San Antonio, Texas featuring a subject close to his heart.  He is of
Mexican, Spanish, and American Indian descent.  His exhibit is
about how San Antonio and its streets were laid out by the ancient
inhabitants according to the stars in the sky.  He spoke of Orion and the Orion nebula and the North Star and why North Star Mall was
named that.  He told us how the Navarro Street matches the long
part of the arrow in Sagittarius. I found that most interesting and
later asked Gary if he would come and speak to our group sometime.  He said he would.  How many Navarro, Ruiz family
members or others know of that.

Posted by Carol Cieszinski at 4:32 PM No comments:

Carol Cieszinski
Carol has been interested in family communications since she was a young girl. Her Grandfather, Joe Celso Navarro, would tell Carol of his ancestors who settled Texas when it was under many country flags. It intrigued her so much that she spent the rest of her life pursuing information on two of Texas’ sons, Jose Antonio Navarro and Francisco Ruiz. Throughout the years she has had many opportunities to meet family members and friends. She is active in an organization, friends of casa Navarro, which is dedicated to the legacy of her ancestor. It is her hope that you will enjoy learning about the Navarro and Ruiz families and their many deeds.